…or the Balance between Artistic Movements, Free Artistic Expression and Copyright Law

On 23 February(1)  the Paris Court of Appeal upheld the decision of the High Court of Paris of 8 November 2018 condemning the American visual artist, the highly-rated Jeff Koons, and the Centre Pompidou in Paris for infringing a Naf-Naf advertising campaign dating from 1985. This is not the first time that the artist has been penalized in France and abroad. Thus in December 2019(2) , the Paris Court of Appeal had already handed down a decision for counterfeiting the photograph “Enfants”, the work of the photographer Jean-François Bauret, and previously, in the early 1990s, it was in the United States that he was censured for plagiarism by his sculpture « Strings of Puppies »(3) .

Another sculpture exhibited during a retrospective devoted to Jeff Koons at the Centre Pompidou in 2014 is at the origin of the present dispute. The sculpture in question, depicting a young woman lying in the snow with, at her head, a pig carrying a barrel, like a Saint Bernard, and two penguins, was inspired by an advertising graphic created by Franck Davidovici, a freelance artist, for the Naf-Naf Company. The first and second works were both titled “Fait d’hiver”.

The graphic by Franck Davidovici

The sculpture by Jeff Koons 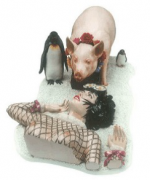 Franck Davidovici then sued the Centre Pompidou and Jeff Koons for copyright infringement and won the case before the High Court of Paris. The decision of the latter has now been confirmed by the Paris Court of Appeal.

The Appeal Court considered that the first work, the photograph by Franck Davidovici, was original. The Appeal Court acknowledged differences between the two works but decided that the similarities between them were predominant.  It did not accept Jeff Koons’ defence, based in particular on the parody exception and freedom of artistic expression.

On the Parody Exception

The Appeal Court recalled that, according to the established case law of the CJEU(4) , for the parody exception to be established, three criteria must be satisfied: “the secondary work must evoke an existing work, the secondary work must not be liable to be confused with the primary work” and “must constitute a manifestation of humour or mockery”.

In this case, the Court notes that Jeff Koons’ description of his own sculpture did not enable any expression of humour or mockery to be discerned. Moreover, in the absence of any reference or comment, his intention to evoke the pre-existing photograph had not been demonstrated, especially as the latter dated from 1985 and had been forgotten or unknown to the exhibition’s attendees, so that they could not refer to it when they saw the sculpture.

On a Right to Freedom of Artistic Expression in France

Jeff Koons had also asserted his right to freedom of artistic expression by invoking Article 10 of the Convention for the Protection of Human Rights and Fundamental Freedoms(5)  and citing the Klasen case law of 15 May 2015(6) , which henceforth requires the French judge to balance freedom of expression and copyright law through a concrete assessment of facts.

It should be noted that this balancing is likely to obstruct the “appropriationist” movement that Jeff Koons has always defended. This artistic movement, which was born in the United States in the 1960s and 1970s, consists for an author in appropriating an object or a pre-existing work without seeking the authorisation of the author of the original work and making it his own as part of a reflection on the world of art and its principles.

Thus, for Jeff Koons, the disputed statue, which is part of the “Banality” series, conveys a message that is very different from that of the advertising montage produced for Naf-Naf, which is not contested by Mr Davidovici. It “allows him to construct a story on Banality as Rescuer”, “banality being embodied here in addition to borrowings from popular culture by a harmless farm animal… which comes to the rescue of humanity represented by the reclining woman. This banality comes to the rescue of the young woman by leading her to accept herself as she is, naked and free of any guilt or fear of being judged”.

It recalled that freedom of artistic expression must be exercised “with full respect for other fundamental rights such as the right of ownership from which copyright arises” and concluded that “there is no circumstance that justifies Jeff Koons, who himself occupies a leading position on the art market, failing to find out who was the author of the photograph he intended to use as inspiration, in order to obtain his authorisation”.

Thus the implementation of copyright protection for the photograph “Fait d’hiver” constitutes a proportionate and necessary infringement of Jeff Koons’ freedom of artistic expression.

On the condemnation of the Centre Georges Pompidou in Paris

The Centre Georges Pompidou was also condemned alongside Jeff Koons. The Appeal Court first reiterated that infringement is characterised, independently of any fault or bad faith, by the reproduction, representation or exploitation of a work of the mind in violation of the property rights attached to it and that Mr Davidovici is therefore entitled to seek to establish the Centre’s liability. It then pointed out that, as a professional establishment, it was up to the Centre to ensure before the exhibition and the disputed publications that the works of Jeff Koons, in particular the sculpture “Fait d’hiver”, were not likely to infringe the rights of others and in any case to obtain a guarantee on this point from the artist and his company.

For the exhibition of the disputed sculpture and its reproduction in books, an amount of 190,000 Euros in damages to compensate for the infringement of moral and patrimonial rights, higher than the first instance award, is allocated to Franck Davidovici, a sum for which the Centre Georges Pompidou is liable to pay 20% in solidum, in addition to the costs. The Centre Georges Pompidou is also prohibited from exhibiting the sculpture or reproducing it in any way, including on websites, or else incur a fine of 600€ per infringement and per day.

After this decision, French museums will perhaps think twice before exhibiting « appropriationist » creations, and will in any case make sure they have the necessary guarantees, as the risk of being condemned to pay substantial damages for infringement is no longer a fiction…

1 Everyone has the right to freedom of expression. This right shall include freedom to hold opinions and to receive and impart information and ideas without interference by public authority and regardless of frontiers. This Article shall not prevent States from requiring the licensing of broadcasting, television or cinema enterprises.

2 The exercise of these freedoms, since it carries with it duties and responsibilities, may be subject to such formalities, conditions, restrictions or penalties as are prescribed by law and are necessary in a democratic society, in the interests of national security, territorial integrity or public safety, for the prevention of disorder or crime, for the protection of health or morals, for the protection of the reputation or rights of others, for preventing the disclosure of information received in confidence, or for maintaining the authority and impartiality of the judiciary.