The matter is regularly discussed in jurisprudence and new decisions were recently rendered.

In a first case, an opposition was filed by Cadbury UK Ltd before the British Office against the registration, requested by Produits Nestlé SA, of the following 3D trademark: 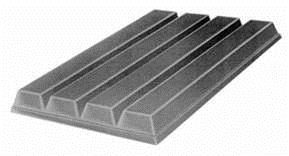 Cadbury disputed the registrability of the shape of the famous chocolate wafer marketed by Nestlé under the trademark Kit Kat. The opposition was approved by the British Office who considered that the previous registration, namely the sole shape of the wafer, was inherently lacking in distinctiveness.

Furthermore, Nestlé’s use, that had barely altered since 1935, was deemed insufficient to give the shape at issue a distinctive character, as the shape applied for did not present the name « Kit Kat » as written on the product, and consisted of the product separated from its packaging. 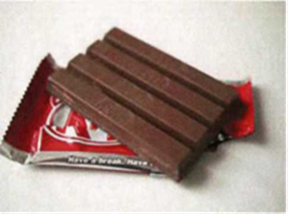 Therefore, the Court of Justice of the European Union (CJEU) was asked by the English High Court of Justice to give a preliminary ruling on the following question : has the sole shape of the wafer to function as a trademark providing a guarantee of origin and thus identifying the product or the service as originating exclusively from a given company or, it is sufficient that a substantial part of the public recognizes this shape and links it to the goods and services marketed by the same company.

According to a recent opinion of Advocate-General Melchior Wathelet (June 11, 2015, C-215/14), the applicant needs to demonstrate that the trademark applied for is able, in itself, for a reasonably well-informed, observant and circumspect consumer,  to indicate the exclusive origin of the goods and services at issue, as opposed to any other trademark that may also be present, and without possible confusion.

Thus Advocate-General Wathelet rejects the position advanced by Nestlé in a previous case regarding the registrability of the sign « Have a break… ». In that case, the Court admitted that the distinctive character of a trademark could be gained by using it as a part of another mark – in that case, « Have a break, Have a Kit Kat » – or in conjunction with another mark, namely « Kit Kat », as long as interested parties were able to identify, through the particular use, the goods or the service as originating from a given company (C-353/03).

The CJEU was also asked by the High Court to decide whether the grounds for refusal should be applied cumulatively when, as it is in this case, the shape of the goods result from their very nature, is necessary for a technical result to be achieved and gives its substantial value to the goods. On this matter, Advocate-General Wathelet concludes that a shape comprising these three essential characteristics cannot be registered and one of these characteristics is enough to prevent the registration of the said shape.

Finally, Advocate-General Athlete concludes that the words « necessary for a technical result to be achieved » should apply both for the way the goods at issue work and the way they are made.

Therefore, if the ruling of the CJUE follows the opinion of Advocate-General Athlete, a sign registered as a trademark needs to allow, as such, any interested party to identify the goods or service concerned as specifically originating from a given company and, for the assessment of an eventual distinctiveness gained by use, only the sign at issue’s use shall be considered, thus excluding any conjunction with other elements. As a result, protection for trademarks consisting of a shape may become even harder to get than it already is.

However, by decision of 19 June 2015 (T-396/14) from the Court of First Instance of the ECJ, a figurine registered by Lego as a trademark for toys overcame a cancellation request filed by a manufacturer of similar goods. In rejecting the manufacturer’s appeal, the Court, following the Board of Appeal of OHIM, held that the applicant failed to demonstrate that the contested trademark exclusively consisted in a shape necessary for a technical result to be achieved. The figurine was not modular as it could not be combined with identical figurines. Thus, its shape did not result from a technical function. Indeed, the fact that some parts were moveable was not, in itself, a technical result. The same applies to the possible assembly of the figurine with Lego blocks. 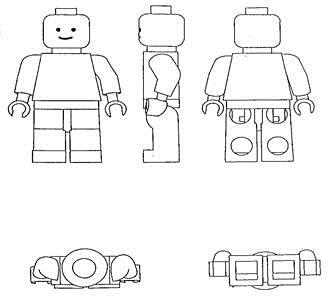 In brief: Starting from the 1st of July 2015, new rules of procedure will be applied before the Court of the European Union, especially regarding intellectual property law (single judge, determination of the language of the proceedings, single exchange of written pleadings, etc…). See the Press Release 73/15 of June 19, 2015.

A Decree dated June 10, 2015 amending the Decree of April 24, 2008 regarding the procedural fees charged by the French Intellectual Property Office was published in the Official Gazette of The French Republic on June 13, 2015.