The Guidelines indicate that conventional antibodies can be defined by different ways, including (but not limited to) structural features and functional features.

Definition by structure of the antibody

The Guidelines indicate that it is necessary to define a conventional antibody by at least its six CDRs to fulfil the requirements of clarity (Art. 84 EPC).

A claim to an antibody defined by its structure by fewer than six CDRs will be considered to fulfil the requirements of Art. 84 EPC only if it is experimentally shown that one or more of the six CDRs do not interact with the target epitope or if it concerns a specific antibody format allowing for epitope recognition by fewer CDRs.

It is possible to define the antibody by reference to the target antigen, as long as the antigen is clearly defined in the claims.

The EPO Guidelines do not indicate what would be considered as “clearly” defined. One clue would be to specify the sequence(s) of the antigen in the claims (and in the description) or to ensure that the meaning of the term is clear for the person skilled in the art from the wording of the claim alone. The Guidelines specify that when a protein sequence is introduced, an open language (such as “comprising”) or sequence variability would not be allowed, otherwise the claim will be considered to lack novelty over prior art.

However, since an antibody defined by functional features and/or by its epitope cannot be easily compared with known antibodies, there is also a risk of implicit disclosure, unless the Applicant demonstrate that antibodies from the prior art do not display the same functional features and/or target another epitope than the one claimed. The burden of proof of novelty to distinguish the claimed antibody from the prior art resides with the applicant.

Definition by hybridoma or by production process

Antibodies can also be defined by the process of their production, i.e. either by the immunisation protocol of a non-human animal with a well-characterised antigen or by the specific cell line used to produce them. However, this definition should be based on the immunisation by an antigen comprising a sequence 100% identical to a defined sequence (and not less than 100%) because the use of variants is considered to render the scope of the antibodies obtained by the immunisation process unclear.

Antibodies may also be defined through a deposited hybridoma cell producing the antibodies. 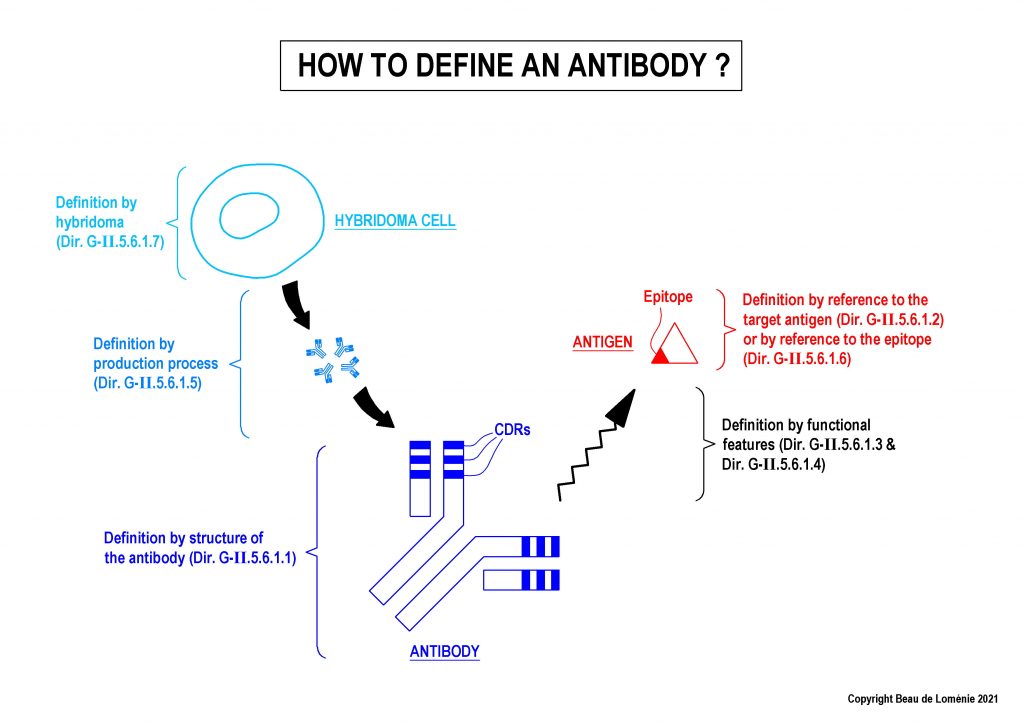 The EPO Guidelines confirm that it is possible to claim an antibody characterised by the sequences of both variable domains or CDRs with less than 100% sequence identity when combined with a clear functional feature.

However, the percentage of sequence identity that could be allowed is not specified in the EPO Guidelines. According to our experience, an antibody characterised by the sequences of both variable domains or CDRs with less than 80 % sequence identity generally leads to an objection by the EPO.

Under European practice, inventive step can be recognized for a novel, further antibody binding to a known antigen only if a surprising technical effect is shown by the application. Said surprising technical effect should be demonstrated by a comparison with the antibodies known from the prior art and is for example an improved affinity, an improved therapeutic activity, a reduced toxicity or immunogenicity, an unexpected species cross-reactivity or a new type of antibody format with proven binding activity.

The EPO Guidelines indicate (or confirm) important criteria for the assessment of inventive step of antibodies:

Our experts in biotech remain at your disposal to answer your questions.