The French law n° 2021-1104 of 22 August 2021 on combating climate change and strengthening resilience to its effects was published in the French Official Journal on 24 August. Article 32 thereof introduces into French law a so-called “repair clause” for parts intended to restore a motor vehicle or a trailer to its original appearance, as defined in article L. 110-1 of the French Highway Code.

These pieces correspond in particular to wings, mirrors, bonnets, optical components and glazing.

These spare parts include both so-called original equipment parts, corresponding to the first incorporation of the part into the new finished product, and aftermarket parts, i.e. repair parts.

The subject of spare parts, particularly in the automotive sector, is far from being a new issue (see previous Flash). When Directive 98/71 of the European Parliament and of the Council of 13 October 1998 on the legal protection of designs was adopted, the Member States were unable to agree on the status to be given to these parts and, in the end, the Directive stipulated that they could only change their national legislation in the direction of liberalisation.

Since then, several attempts in this direction have been made in France. Thus, at the end of 2019, in Mobility Orientation Law (loi d’orientation des mobilités, LOM) adopted by the French National Assembly, an article relating to the liberalisation of the market in visible spare parts was introduced by amendment. This provision was censured by the Constitutional Council as an inappropriate rider to the draft law. Indeed, in order to be adopted, an amendment must have a sufficient link, even indirectly, with the original bill or the legislative draft. Otherwise, the amendment in question may be censured.

Less than a year later, in 2020, in a new legislative vehicle, the bill to Accelerate and Simplify Public Action (loi d’accélération et simplification de l’action publique, ASAP), a new « repair clause » was proposed and again censured by the Constitutional Council for the same reason.

So it’s third time lucky for this fresh attempt at change: article 32 of law n°2021-1104 thus liberalises the market for visible car spare parts. These provisions, codified in the Intellectual Property Code, will come into force on 1 January 2023.

Article 32 thus substantially modifies the protection attached to so-called aftermarket parts, i.e. visible parts identical to the original part, used to give the vehicle the initial appearance it had when it was first put on the market, as defined by the Court of Justice of the European Union in its judgment of 20 December 2017 (CJEU n°C-397/16 and C-435/16 of 20 December 2017).

The first major change introduced by this article concerns the copyright that may be attached to these parts.

Article L.122-5 of the amended Intellectual Property Code thus provides for a new exception to the rights that may be claimed by the author and stipulates in its 12° clause that, once the work has been disclosed, the author may not prohibit “the reproduction, use and marketing of parts intended to restore the initial appearance of a motor vehicle or a trailer, within the meaning of article L. 110-1 of the Highway Code“.

No copyright can now be claimed on visible aftermarket parts.

This is a new and important limitation. In France, copyright often compensates for the lack of protection for these parts under design law due to non-registration.

The new limitation on design rights is twofold.

Firstly, for spare parts intended to restore the original appearance of a motor vehicle or a trailer, the duration of protection under design law is reduced from 25 years at most to 10 years at most (article L.513-1 of the Intellectual Property Code).

Secondly, and more specifically, a new exception to the exercise of design rights by their holder is provided for. Indeed, it results from point 4 of article L.513-6 of the amended Intellectual Property Code that the latter may not assert its rights against acts aimed at restoring the original appearance of a motor vehicle or a trailer, within the meaning of article L.110-1 of the Highway Code, and which a) concern spare parts relating to glazing or b) (…) are carried out by the equipment manufacturer who produced the original part.

Thus, three cases can be identified:

– All the equipment manufacturers, whether they manufactured the original part or are independent, will be able to market glazing parts freely without infringing design rights

– The equipment manufacturer which produced the original part will be able to market any visible car spare part, in particular mirrors, optics or car bodywork, in the same way as the manufacturer

– All independent equipment manufacturers will be able to produce and market other visible spare parts at the end of a period of 10 years from the date of registration of the design, as opposed to the current maximum of 25 years. 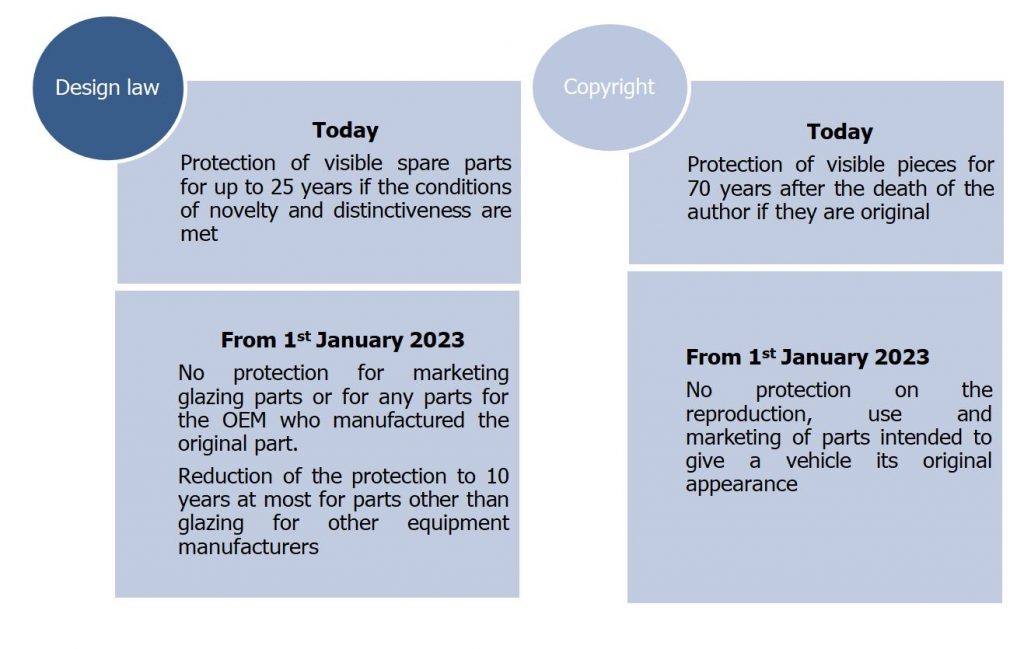 Germany has also recently amended its legislation to exclude the protection by registered designs as from 2 December 2020. This new exclusion concerns spare parts of complex products used solely for the purpose of repairing that product and restoring its original appearance, provided that consumers are informed of the origin of the spare part they are purchasing.

In France, the adoption of these provisions relating to the automobile market on the occasion of a law combating climate change might seem paradoxical. However, the paradox is only superficial since the aim is to ensure that cars are better maintained by their owners and produce less waste.

Article 32 of law n°2021-1104 of 22 August 2021 puts an end, at least for the time being, to a struggle between car manufacturers, spare parts manufacturers and car retailers that has lasted for decades.